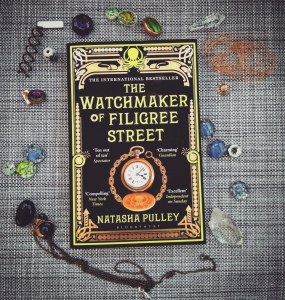 “Science can save a man’s life, but imagination makes it worth living.”

The Watchmaker of Filigree Street by Natasha Pulley

In 1883, civil servant Thaniel Steepleton returns to his depressing flat in a grey boarding house to find that it has been broken into. Nothing has been taken but his dishes have been washed and put away, and a beautiful but apparently broken gold pocket watch has been left on his bed. A short while later, that same pocket watch saves Thaniel’s life during a Clan na Gael terrorist bombing, but makes him a suspect for the policeman who sees how it forewarns him of the blast. Desperate to prove his innocence, he goes in search of the maker, and soon finds himself drawn into an adventure he could never have imagined.

The Watchmaker of Filigree Street is the first novel of Natasha Pulley, though I actually came to it having read her second novel, The Bedlam Stacks which isn’t a sequel as such to the series though it does operate within the same universe and features the character Keita Mori at an early stage of his life. The books can be read out of sequence, and the second was enough to bump the first right to the top of my to read list.

I find Natasha Pulley’s writing to be a bit like stepping into a warm bath. It engulfs you and is instantly comforting, her style is so fluid and natural, there’s no hesitance in suspending belief. As soon as you begin reading you are in the old broom cupboard at the home office, with the smell of tea and cleaning salts. The whole novel has vast sensory appeal, drawing you in even further to the world of Lipton tea, cream cakes, lemon soap and whirring machinery.

Part of this is Pulley’s clever characterisation as well. Thaniel experiences synaesthesia and sees sound, which not only enhances your experience of his world, but invites you to see the exceptionalism in a character who sees his existence as wholly ordinary and who has, out of a sense of obligation and decency, given up his dream of being a pianist and settled for a life whose pleasures amount to being able to afford ten candles and two baths a week.

There is a deceptive gentleness to the novel, both the watchmaker Keita Mori with his kind eccentricity, tinkering away in his workshop making fascinating steampunk creations; and scientist Grace Carrow, desperately seeking to prove her theory of the luminiferous ether to buy her independence from her overbearing parents seem, on the whole as characters that we can sympathise with. But when Thaniel finds himself caught emotionally between the opposing geniuses, who both wish to be the center of his world, we become shocked at what each might be prepared to do in order to secure the future that they hope for.

I admire any novel which managed to include a clockwork octopus with a penchant for stealing socks and shiny things as a character without wandering into the ridiculous, but The Watchmaker of Filigree Street is such a joyful mixture of steampunk, magic realism, thriller and historic adventure that I’d recommend it to anyone. I’ve already bought two copies to give as Christmas presents and I haven’t ruled out buying more.

And if you do know of a clockwork octopus of that nature, ideally answering to the name Katsu, please send it my way. My sock drawer is warm and welcoming.

Pulley successfully raised my hackles against Grace Carrow when she had her declare that women shouldn’t have the vote, considering herself a typical to most women and feeling that her sex generally weren’t capable of thinking rationally, preferring to focus on politician’s sideburns instead… but in some ways, you do have to wonder if she has a point about Keita Mori’s ability to see possible futures and nudge events to ensure a certain outcome. A person who could do that could be incredibly dangerous and would be able to control you without you really realising. And the novel provides numerous examples of Mori doing just that, slightly manipulating events to save his friend Ito, or chillingly failing to act but making sure that he was in position to witness his cousin dying in a wall collapse, an event that we know he could have predicted.

But Grace is controlling herself. We see her lie frequently to ensure that Thaniel does what she wants him to do, or to hide the truth from him when she has deliberately acted in a way that she knows will hurt him. She extends the offer of a marriage of convenience to solve both of their problems, but then changes the terms of this to want a full marriage when she sees that Mori will make it difficult to control Thaniel. She also frequently underestimates Thaniel, which she acknowledges is because she has seen him as being her intellectual inferior. She is ruthless and will go to horrendous lengths to get her own way, which doesn’t make her a reliable judge of character when she gives an opinion intended to sway Thaniel to her way of thinking.

If we are to take Mori at his word, he finds Thaniel hard to anticipate because he is indecisive, which would clearly be a character trait which would appeal to a man who can instantly and clearly see all possible futures the second they become possible. This is why he has chosen to make himself a pet octopus which is robotic and controlled by random gears rather than get the puppy that Ito suggests. He wants something in his life which is beyond the sphere of his control.

I think that Mori flipping the train bolt in the air for Grace Carrow to see after Akira Matsumoto has returned to see Thaniel receive his award for bravery is something of an olive branch, as well as making good on his threat to wreck a train earlier in the novel. By wrecking the train that Akira Matsumoto has caught so that it will break down in time for him to see the newspaper cover about Thaniel, it allows Matsumoto to return to Grace and gives them an opportunity to confess the feelings for one another that they have clearly been unable to admit all through the novel. Yes, his ability to sail the tides of chance is sinister, but he’s used it to effect a happy ending for someone who has been his rival.

1 thought on “The Watchmaker of Filigree Street by Natasha Pulley”