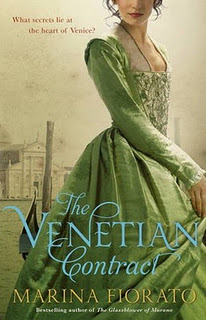 In 1576 a ship sails from Constantinople to Venice carrying both life and death in its hold.

Death comes in the form of a dying man, a victim of the Bubonic Plague, sent by the Sultan to spread the disease through the city and bring his enemies to their knees. Life comes in the form of a talented young doctor, Feyra, a stowaway, running from the Sultan’s advances and carrying an important message for the Doge of Venice. But Feyra has few allies in the plague ridden city, and time is running out…

Taking real historic details as a starting point, Marina Fiorato has created an enjoyable story which, though clearly very well researched and brimming with historic detail, feels natural and engaging. Those with a passing interest in history will be pleased with the detailed reconstruction of plague struck Venice, with its saints and quacks, while those reading for adventure and romance will not be disappointed.

The characterisation is decent, there being enough complexity to prevent Feyra becoming the stock plucky yet virtuous maiden, and enough warmth to prevent Annibale becoming a Renaissance Mr Darcy in a bird mask. The relationships which develop between characters are for the main part credible, if a little oversimplified, though the author uses a subjective narrative to understate or overstate the bonds between characters to great effect at times.

The novel relates some very dramatic moment- births, deaths and destruction- without seeping into hysterical melodrama.  And though there were occasions when the novel felt a little awkwardly paced, or when characters felt a little more like plot devices than characters (Columbina Cason) I was impressed with the way the author managed the pace and scope of the novel.

Looking at the cover with its beautiful woman in a low-cut corseted dress against the backdrop of Venice, you could be forgiven for thinking that this would be something of a bodice ripper and dismiss it as a result. Don’t. The cover is beautiful in its own way but really doesn’t do the story justice.

On the whole this is an enjoyable read, which is suitable for young adults but which has enough flair to impress an adult reader as well.

If you’ve read this and liked this try Geraldine Brooks’ Year of Wonders or Salman Rushdie’s The Enchantress of Florence.