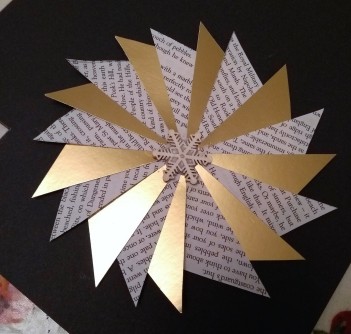 I was inspired to make this starburst having seen this Prairie Point Star from Supermom No Cape and even tried making a 3D paper version of it, which I still think is possible, but would need more headspace than my toddler and baby give me during our crafting sessions!

Even though it’s not quite what I was planning to make, I’m happy enough with it and think that a few in various sizes would look quite nice stuck to the wall en masse as a Christmas decoration. I might even try layering the starbursts to make a wreath of sorts when I have a bit more time.

To make a paper starburst decoration you need:

How to make a paper starburst decoration: 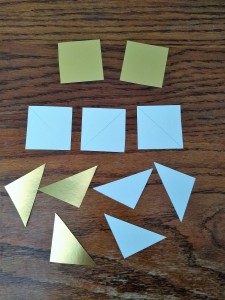 2. Measure out another square and draw out lines marking each of the quarters. 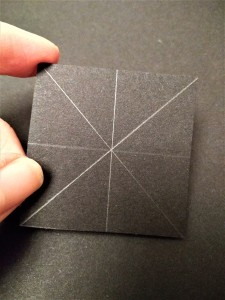 3. Begin placing your triangles on this guide square, deciding what level of spacing you prefer. If you like a more spread out starburst use four triangles per quarter, if you like a more compressed look use five per quarter. DO NOT glue the first triangle to the paper, glue the second to the first and then each triangle after that to the triangle before it while building up the pattern in a circle. You will need to be able to lift the first triangle to slot the final joining triangle beneath it to create a unified look.

4. When all the pieces are in position, you can securely stick the first piece and the final piece together. Add a splodge of PVA glue in the middle and glue an embellishment in the central spot to hide the join and hold the whole ornament firmly together.

Depending on the size of your final ornament you could hang this on a string to use as a tree decoration, or blue tack to the wall in a starburst scene.