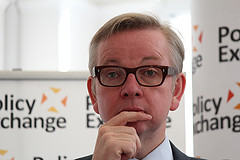 I tweeted a few days ago that Michael Gove’s reforms to the English GCSE curriculum reminded me of Putin’s Literary Canon pronouncements a few years back– nationalistic, narrow-minded and reductive. For anyone who hasn’t heard, the head of OCR’s head of GCSE and A-level reform claims that Michael Gove has personally intervened to ensure that where novels like Of Mice and Men and To Kill A Mockingbird would have originally been studied, students will now be examined on a work of fiction or drama originating from the British Isles since 1914.

I am deeply concerned that the education secretary has been allowed to interfere in the English Literature curriculum without consultation with teachers and universities about this. There is no university department which teaches an English Literature degree without reference to writers from outside the UK, for the simple reason that literature is not something which is restricted by geographical borders- it is designed to challenge and breakdown barriers, not to reinforce them in such an arbitrary and mindless way.

And, to steal David Cameron’s favourite phrase, let us be perfectly clear, while there are plenty of students who could and would engage with the works of Jane Austen and Dickens, there are plenty of students who would find the language and volume of reading a struggle. Lower ability students will be penalised as they will require extra support to access the lexis, syntax and context of these novels in the limited contact time that they have with their teachers. So this latest reform will do to the novel what his plans to have primary school children learning and reciting poetry by rote will do- turn more and more students off Literature.

Students used to ask me why I chose to study English Lit at university- and I would tell them it was because I couldn’t decide what subject to study. When studied properly, literature allows you to study history, psychology, sociology, philosophy, politics, religion… it broadens the mind. That’s what worries me about this latest announcement, it’s so incredibly reductive it makes me wonder if Gove isn’t one of those little grey men from Michael Ende’s Momo, ripping the colour and fun out of education for every child in the country because they are at odds with his personal values.

Whatever he is, he’s a very dangerous man.

2 thoughts on “Michael Gove- The Little Grey Man of Literature”

I've seen a lot of love for A Good Girl's Guide to Murder. I thought it was a fun read, but I have to say I did find it a little heavy handed at times. Not that it will stop me reading the others in the series when I get round to it! Have you read this book and others in the series? What were your thoughts? #agoodgirlsguidetomurder #hollyjackson #booksofinstagram #bookstagramuk #bookblogger #yabookstagram #yabooksofinstagram #crimebooks #crimefiction #bookandtea
If you're headed to Cornwall this summer, I can't recommend A Year of Marvellous Ways highly enough as a holiday read. A gentle jewel of a novel which explores the friendship between an 89 year old woman and a young soldier with PTSD after the second world war, it's a book you could happily get lost in. #ayearofmarvellousways #sarahwinman #bookstagramuk #flatlaybooks #marvellous #booksofinstagram #booksofinsta #booksofig
My friend passed this on to me, written by Ruth Jones of Gavin and Stacy fame. I did enjoy it but wow, what a pair of absolute shits the main characters are! It's a good example of a book where you can get wrapped up in the story, despite disliking some of the characters pretty intensely. #ruthjones #nevergreener #booksofinstagram #bookstagramuk #bookandflower #theaffair #bookblogger #badpeople #cheating #betrayal
Bow down to the Queen of Unreliable Narrators, Janice Hallett has done it again. Looking forward to unpacking all of that in a rambling and barely coherent spoilers after this point section when I have finished processing my thoughts. Has anyone gone out and bought the Masquerade book after reading this? I loved the idea of the hunt for a golden hare. Someone needs to resurrect the genre for the digital age!
I quite enjoyed Run Rose Run, written in collaboration between Dolly Parton and James Patterson. One day I will make it to Nashville.
I could read fairytales with a twist non-stop and never get bored if they were all as good as A Single Thread of Moonlight by Laura Wood. Masked balls, haughty heroes, mysteries to solve and a Cinderella who doesn't need saving; it very much helped keep me sane when I get was forced into pulling an all nighter shuttling between poorly children recently.