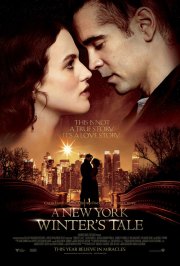 If you’d told me that I would consider not buying a book because it had Colin Farrell on the cover when I was thirteen, I would have told you that you were mad. Ballykissangel, Falling for a Dancer… I was young, leave me alone.

Anyway, it did nearly put me off buying a copy of A New York Winter’s Tale by Mark Helprin which had been released with the poster from the new film, starring the aforementioned Colin Farrell (I’m over it) and Jessica Brown Findlay, but I was intrigued by the blurb which promised:

One night in New York, a city under siege by snow, Peter Lake attempts to rob a fortress-like mansion on the Upper West Side. Though he thinks it is empty, the daughter of the house is home . . . Thus begins the affair between this Irish burglar and Beverly Penn, a young girl dying of consumption. It is a love so powerful that Peter will be driven to stop time and bring back the dead; A New York Winter’s Tale is the story of that extraordinary journey.

Who doesn’t like a love that defies death? But despite the blurb, that’s not really what you get. It’s more than that, and less than that. It builds to the point where you’re invested in the lovers, then spits them aside and moves on with the story. A bit like life I suppose.

Helprin is a fantastic writer and has created a vast and imaginative magic realist epic. The book is original, the writing nuanced and many of the minor character are more clearly realised than the main characters in the majority of the bestsellers you will find in bookshops. The problem for me that it slipped around between genres in a way that didn’t add to the story but detracted from it. Audrey Niffenegger showed us that you could have a masterful time-travelling love story, I don’t see a reason why you couldn’t have a time-travelling love story which leads to a quest, but for a reader to engage with a quest story they need to understand what the characters involved are hoping for, what they want or need to achieve. I loved the first three-quarters of this book, but it lost me towards the end as the characters began to run around in a desperate attempt to do something fuelled by a secret knowledge that the reader just didn’t share.

It’s a magical read for the most part, but the plotting towards the end was more than a little lacklustre.