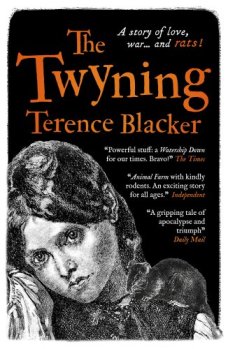 Beneath the city of man is a kingdom of rats. The rats are a sophisticated society, with each rat working for the good of the collective depending on its individual abilities. It might be a warrior, a taster, a historian, a spy or a translator but it will put the needs of the kingdom ahead of its own desires because they understand that tradition and love is where the strength of their kingdom lies, and nothing demonstrates the strength of the Kingdom more effectively than The Twyning:

“They were The Twyning. They tugged against one another, forever in motion, forever going nowhere. For almost all their lives, they had been united by an accident of nature that had occurred while they were still in the nest.

Their tails had become inextricably entangled. As they had grown, the knot of living tissue that was at their centre melded and fused together so that, with adulthood, each of these was less an individual rat than a limb on a greater shared body, a spoke on a wheel of flesh.

We know that to have a twyning within the kingdom is a rare blessing. As it grows, it is fed and kept alive by citizens, and it is respected by all, even by the Court of Governance and by the ultimate source of power among rats, they king.

The Twyning expresses life’s mystery. Unable to move in any one direction except at an awkward, complicated shuffle, it has its own kind of strength, for nothing terrifies a human more than the sight of rats, helpless, bound together, yet powerful.

Above all, it shows the power of the kingdom.

For it is love which keeps The Twyning alive.”

The Twyning by Terence Blacker

The most important tradition in the rat kingdom is the abdication of a dying king, who swims downriver to the world above allowing his successor to be named, but when the time comes for the great King Tzuriel to step down, something terrible happens. It will push rats and humans to the brink of war, and at the heart of it all is a young rat called Efren…

I am on a rat run at the moment. By which I mean that I have been reading a lot of books about rats, which my boyfriend is a bit worried about. He suggests that I may have a few issues, but really, there a few things finer than a fictional rat and The Twyning by Terence Blacker is one of the best rat books I’ve ever read.

Set in Dickensian London, The Twyning portrays a world in which talentless politicians conspire with fearful and biased scientists to achieve their personal ambitions, bending the law of the land and spending public money to support their pet causes while impoverished children live on the street ignored or abused by those in authority. In many ways it’s a novel for our times. Swap the word rat for badger, unemployed or disabled person and Dr Ross-Gibbs’ plans might read like a Tory manifesto, but don’t for a second think that I mean to suggest that this is a soap box rant. It’s more a politically aware, urban Redwall for the noughties- vividly imagined and sharply executed.

It’s difficult to express how good this book is without giving too much away, but if you like stories with friendship, battle, love, gore, misadventure and redemption then this book is for you.

And if anyone thinks that the idea of a tangled group of rats called a Twyning is silly, check out these Rat Kings to see that these things do, in a sense, exist.

3 thoughts on “The Twyning by Terence Blacker”