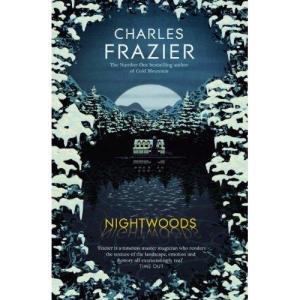 I have a not so secret fantasy of going to live on a secluded small holding and living off the fat of the land (to borrow Lennie and George’s expression). I know that the reality of this would be alot less idyllic than the fantasy, but sometimes the urge to get away from the background noise of cars, mobile phones and televisions is overwhelming. But you suspect that it could get a little lonely. Maybe even a little creepy.

In Charles Frazier’s Nightwoods, the main character Luce is perfectly content to live like this. Having become the caretaker of an empty lodge after a distressing incident in her past, the still young woman is content to live in solidtude, spending her days quietly contemplating the landscape of the Appalachian mountains and the power of nature. Her peaceful existence is collapses when she inherits her sister’s troubled children, who have been mute since they witnessed her mother’s murder.

As Luce struggles to heal the ferocious and disturbed twins, she is forced to confront her past and learn to trust. Danger, love and apprehension are thrown together when the man who killed Luce’s sister begins to hunt Luce and the children.

This is a stunning novel from Charles Frazier, which sees him move away from his preferred historical period of the American Civil War to write about a town in 60s America. Despite this time shift, the description of scenery remains stunning, and there is a beautiful sense of Luce being a timeless tradition in the hills, which is a stark contrast to the grimy world of greed, deception and drug addiction of the post war America we see embodied by characters like Bud. There are lots of stories about psychologically damaged children in the world (you can’t move in some shops for the memoirs) but I’ve rarely felt such a bittersweet sense of hope than for the blossoming relationship between Luce and the twins.

As a reader, when reading a follow up to Thirteen Moons and the monumentally successful debut novel Cold Mountain, you’re on the lookout for any little slip in storytelling, but in all honesty I preferred Nightwoods to Frazier’s earlier offerings. Having moved away from vast casts of characters, Frazier has refined his style and for me, increased the emotional impact of his writing.

This book would make a fantastic Christmas present, and I will be buying it for my boyfriend’s mother, as she is a lady of great taste!