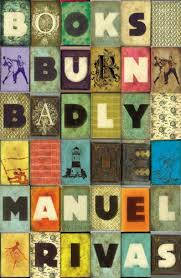 Despite working in an office full of books, I should be relatively safe if a fire breaks out at work because they burn very badly. It’s something to do with the tightly packed pages preventing oxygen circulating and slowing the reaction. So now you know.

Manuel Rivas’ Books Burn Badly tracks the slow, smouldering events which follow a fascist book burning in Galica in 1936, and the knock on effects that they have upon those who witnessed them, transforming a generation from hopeful to broken overnight. A boxer called Hercules, a fascist judge who collects bibles and a superstitious gravedigger; each is affected by the events in their own way.

Though there was some unity to the story in the end and I enjoyed the folkloric elements of the novel, it was a bit too loose and meandering for my tastes. There was a wonderful bunch of characters with their stories intertwined, but I felt there was insufficient resolution. This is a matter of taste, it was beautifully written, but I felt that the characters deserved three books which explored their lives in more detail than one bulky novel which only touched on elements of these.

If you're headed to Cornwall this summer, I can't recommend A Year of Marvellous Ways highly enough as a holiday read. A gentle jewel of a novel which explores the friendship between an 89 year old woman and a young soldier with PTSD after the second world war, it's a book you could happily get lost in. #ayearofmarvellousways #sarahwinman #bookstagramuk #flatlaybooks #marvellous #booksofinstagram #booksofinsta #booksofig
My friend passed this on to me, written by Ruth Jones of Gavin and Stacy fame. I did enjoy it but wow, what a pair of absolute shits the main characters are! It's a good example of a book where you can get wrapped up in the story, despite disliking some of the characters pretty intensely. #ruthjones #nevergreener #booksofinstagram #bookstagramuk #bookandflower #theaffair #bookblogger #badpeople #cheating #betrayal
Bow down to the Queen of Unreliable Narrators, Janice Hallett has done it again. Looking forward to unpacking all of that in a rambling and barely coherent spoilers after this point section when I have finished processing my thoughts. Has anyone gone out and bought the Masquerade book after reading this? I loved the idea of the hunt for a golden hare. Someone needs to resurrect the genre for the digital age!
I quite enjoyed Run Rose Run, written in collaboration between Dolly Parton and James Patterson. One day I will make it to Nashville.
I could read fairytales with a twist non-stop and never get bored if they were all as good as A Single Thread of Moonlight by Laura Wood. Masked balls, haughty heroes, mysteries to solve and a Cinderella who doesn't need saving; it very much helped keep me sane when I get was forced into pulling an all nighter shuttling between poorly children recently.
I mentioned after reading Anansi Boys that I keep meaning to have a Neil Gaiman binge and @rosiehcook recommended The Graveyard Book. I loved it! I got into bed and thought I'd read the first chapter then stayed up to the wee hours to finish it. I took this photo in a hurry earlier because my niece mentioned she's trying to get into reading at bedtime again and at 13 she's pretty much the perfect age for the adventures of Bod and the graveyard ghosts. Old enough to not be too frightened and appreciate the humour. What YA books are on your must read list? I've got five nieces and nephews that I desperately need to impress with books in the coming years 😉 #thegraveyardbook #neilgaiman #neilgaimanbooks #booksofinstagram #bookstagramuk #ghoststories #halloweenbooks #yabookstagram #yabooksofinstagram #lostinabook #timeflieswhenyourehavingfun