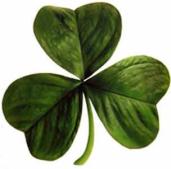 Having an Irish mother, an Irish name and being entitled to hold an Irish passport I should really celebrate St Patricks Day, but I don’t really. I’ll leave that to the good people of America who seem to be going for it in a big way (really, turning the river green? How many pints of Guiness made that seem like a good idea).

I will however share my five favourite Irish writers with you. James Joyce will not feature, so don’t hold your breath.

1) Oscar Wilde was born in Dublin I believe, but is probably better known for his amazing contributions to English Literature. My favourites? The Importance of Being Earnest and The Selfish Giant. Earnest is my favourite play and I can quote most of it, which is much cooler than most people realise.

2) C.S. Lewis because, religion aside, I loved the Chronicles of Narnia.

3) Jonathan Swift and not so much for Gulliver’s Travels more for A Modest Proposal, a satire made all the more cutting when you realise that Swift was of Irish descent.

4) Eavan Boland- it would be patronising to call her a little know poet, because she’s very successful and yet she isn’t one of the ancient white males that are still so commonly associated with “good” poetry, whatever that is. I studied her as part of a modern poetry course at university, and hers is one of the few set texts I move around with me.

5) Cecelia Ahern because anyone who says that they didn’t cry buckets when reading P.S. I Love You needs a bloody good slap. My housemate and I had to meet for hugs in the kitchen to compose ourselves enough to carry on reading.

What are your favourite books/poems by Irish writers?

6 thoughts on “My Top 5 Irish Writers”